The Yellow Star: The Legend of King Christian X of Denmark 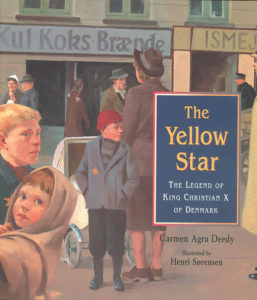 You can find out more and buy a copy here

You can find a teacher’s guide here

For centuries, the Star of David was a symbol of Jewish pride. But during World War II, Nazis used the star to segregate and terrorize the Jewish people. Except in Denmark. When Nazi soldiers occupied his country, King Christian X of Denmark committed himself to keeping all Danes safe from harm.

New York Times best-selling author and storyteller Carmen Agra Deedy has poignantly recreated this legend, which is accompanied by Danish illustrator Henri Sørensen’s arresting full-color portraits. The result is a powerful and dignified story of heroic justice, a story for all people and all times. For more details about the Nazi occupation of Denmark during World War II and the Danish resistance movement, please click here.